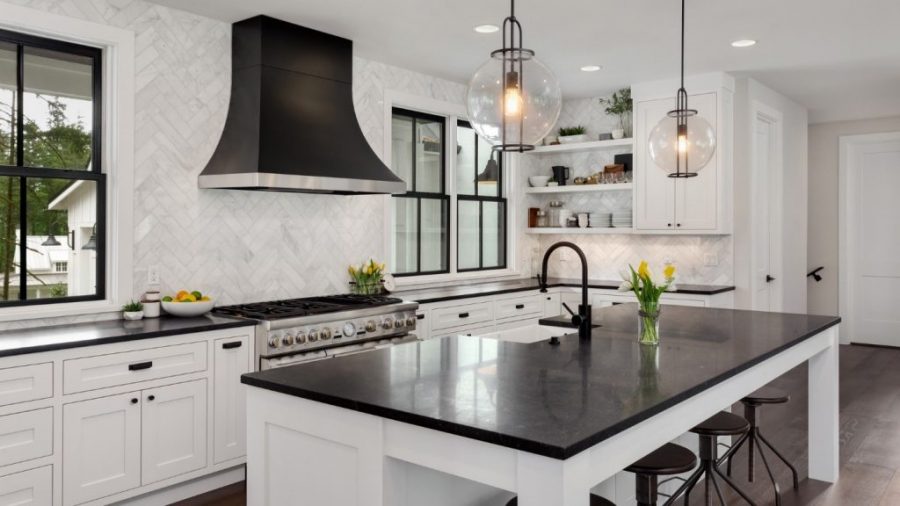 Energy-Efficient: The kitchen is different than the rest of the interiors in our houses in a lot of senses – but perhaps the most important aspect of your kitchen is the very sought-after feeling of health. After all, who wouldn’t like to be sure that what he’s eating is healthy and safe?

While your kitchen should be healthy and clean for the purpose of preparing food for your family, some of us don’t want to stop just at that – you shouldn’t limit yourself to thinking only about your and your close one’s health, be responsible and think about others too. And what better way to care about the common well-being of everyone else than using the most eco-friendly and efficient solutions in your kitchen?

In this article, I’ll try to tell you all there is to know about eco-friendly kitchen appliances, and how to use them efficiently so that when we’re done you’re able to say that you’re a responsible person, who values the environment and the state of our planet.

The most energy-consuming appliance in your average kitchen is the refrigerator, which is known to be consuming at least 10%, and in some cases, even more, of the electricity in the kitchen. That’s why picking the most energy-efficient refrigerator can not only have a huge impact on the environment but also on your wallet. What should you pay attention to when picking the right refrigerator, so that your electricity bills and energy consumption get lower?

•Energy Star – when buying your refrigerator, you’ll find out some of the models have Energy Star certificates or labels attached to them. These are generally the most energy-efficient models, allowing you to save around 10% energy throughout their exploitation. If you want to know more about the whole system of awarding the Energy Star label, look it up online.

• Size – naturally, the bigger the refrigerator, the more energy it generally consumes. Now, plenty of people falls victim to the idea that bigger means better. That’s not always the case – evaluate your needs and pick accordingly. I’m quite sure that a happy couple who lives alone and barely even cooks at home doesn’t really need the biggest of the fridges out there. However, that works both ways – if you pick too small of a fridge and pack it so tight that you couldn’t fit a needle if you had to, the fridge will have trouble cooling all that amount of food, which will put excessive stress on it, leading to overheating and additional energy usage. The bottom line is – to pick accordingly to your needs so that your fridge can work without stress and is not too big at the same time.

• Configuration – the kind which you buy matters as well – studies show that the top freezer models are the most efficient ones, providing around 80 percent of usable space, with the bottom freezers below them at 67 percent, and the side-by-side ones give you only about 63 percent of usable space. Not only that, but the side-by-side configuration is also known to use more energy to keep your food products cold, and we’re talking about 20 percent more energy here, so that’s not a laughing matter.

• Additional features – some refrigerators come with additional features attached to them, such as the ice maker, internal water dispenser, or the ice dispenser. While all of these are surely helpful, they are not really the most energy-efficient and thus safe for the environment, as they increase the energy consumption by around 10 or even 15 percent. Maybe it’s time to rethink getting yourself these features, as I’m sure you can get by without them? The environment will surely be thankful.

• Placement – it’s important that you provide enough of a space between your refrigerator and the sources of heat, such as your stove or oven. Naturally, the refrigerator is all about being cold, so don’t make it harder for your fridge than it already is to stay cool. Otherwise, it will be harder for it to operate, which leads to higher energy consumption.

• The way you use it – always remember to let your warm food cool down before you put it in your refrigerator. Additional heat inside of the fridge means higher energy consumption, so it’s important to remember to use it appropriately for the best results.

When choosing the way your oven or cooktop operates, you’ve got two options – electricity and gas. Let’s take a look at which solution is the most efficient one, both for the environment and your pocket.

• Gas – the main asset of natural gas is certainly that it’s cheaper than electricity. Not only that but it’s also considered to be the most eco-friendly and clean fossil fuel. Studies show that the emission of carbon dioxide is around 45 lower compared to coal. So much with the assets, now for the not-so-cool things about the gas cooktop – it’s known to release toxic by-products into your house. Don’t freak out yet, it’s not as bad as it sounds – we’re talking about carbon monoxide, nitrogen dioxide, and formaldehyde here, but the amount of them is nothing severe, and further lowered by the work of your range hood and other ventilation systems. Still, that’s something you should keep in mind. One last thing is the way gas is actually acquired – the process is called fracking, which means pushing tons of water, sand, and chemicals into the ground to push out the gas. This leads to contamination of groundwaters, so if we’re going for an eco-friendly solution, natural gas surely has its downsides in this department.

• Electricity – usually more expensive than the natural gas counterpart, and it is acquired by burning coal, so there is a lot of pollution involved. Also, you have to remember that at least 70 percent of energy is lost in the process of getting the electricity to power up your appliance. On the other hand, electricity gives you the option of using renewable power sources to fuel your appliances, which means wind farms and solar panels.

• Magnetic induction – a fairly new solution, but one that’s rapidly gaining popularity. Magnetic induction transfers heat directly to your pan, so there is no heat loss involved. Very efficient, very modern, and specialists say also the most eco-friendly. Whether or not that’s true is not easy to accurately pinpoint just yet. One thing that’s important, it’s very safe to use – only your metallic pan is able to heat up, so there is no fear of burning your hands if you touch your cooktop ( just don’t touch the pan itself).

The bottom line is, there is no real way to be absolutely eco-friendly when producing heat in your kitchen, so we’re talking about striking the most comfortable deal here. All in all, electricity has better potential for the future, because of the aforementioned alternative solutions for producing electricity. Now that you know the choices, pick one that seems the most reasonable to you.

Again, size plays a crucial role, so think about what you actually need and what you don’t. If your needs are not substantial, and you barely even use your oven, don’t buy yourself the biggest of them just because it looks more expensive and generally more luxurious. Ovens normally come in three sizes, which are 24,27, and 30 inches wide.
All being said about estimating your needs, sometimes you’ll have a need for a bigger oven, for example when you’re throwing a party every once in a while. If that’s the case, then it’s better to get yourself two small ovens and use the additional one on special occasions, than one, bigger than the needed oven, which you’ll be using at all times, regardless of the amount of food that needs to be cooked.

These days, you can also get yourself ovens with separate, independent chambers, so that you can fire only the chambers that you need.

If you’re looking for a very eco-friendly and energy-efficient solution, look for ovens with convection systems, which basically means the ability to circulate the heated air around your oven. This means that the energy used to heat up that air is used the most efficiently, saving you up to 20 percent of energy.

If you want to make sure you’re not wasting the energy or money, use the light inside of your oven to check if the food is ready or not, instead of opening your oven every time you want to do that – the temperature can drop by even 50 degrees every time you open it, so that’s a huge waste.

Energy-Efficient: Again, look for ones with the Energy Star labels mentioned earlier. They are known to be using even as much as 65 percent less energy than the models with the certificate.

Keep in mind that your ventilation system is crucial for the well-being of your family. An inefficient range hood can cause problems with moisture in your house, as well as problems with odors. Additionally, if it’s the gas-fueled cooktop that you have in your house, there is the problem of by-products I mentioned earlier.

The bottom line is, pick an efficient range hood and don’t forget to use it every time you cook – this isn’t something you should be trying to save up the energy on, as long as you’ve chosen a correct model. Energy-Efficient.

Compared to the traditional oven, your microwave is very energy-efficient, as such is highly recommended for saving energy, which makes it both an eco-friendly alternative to the oven and a money saver. Of course, it’s not like you can cook everything in your microwave, but when the needs are small, try to use it as often as you can.

They are the most efficient when talking about cooking a small amount of food or defrosting them. Also, studies have shown that placing your food on the outer edges of the rotating tray makes the food heat up faster, so if you want to use a microwave in the most eco-friendly manner, that’s the way to go.

One thing that’s important to know is the fact that the majority of the energy consumption when talking about your dishwasher, is tied to heating up the water used for washing your dishes. We’re talking about around 80 percent of the energy consumption here, so that’s a big issue. For that reason, it’s best to look for models that use as little water as possible, when cleaning the dishes.

Always try to look for the Energy Star label on the dishwasher when you’re buying one, the same as in the case of any other kitchen appliance. Energy-Efficient.

Another handy feature of some of the more modern models is a booster heater, which allows your dishwasher to control the temperature of the water better, allowing it to stay at the optimal value for efficient cleaning and efficient energy management.

For maximum efficiency, always use your dishwasher only when it’s fully loaded. The amount of water used doesn’t change, regardless of the number of dishes inside of the dishwasher, so using it less often but for a higher amount of dishes is the way to go.

Usually, the dishwashers come equipped with specific programs, so if your dishes aren’t very dirty, try setting it up for a more energy-saving type of cleaning, which means it’ll do its job just right, but at the lower cost of both the electricity, water, and your money.

This sums up my guide to picking the most eco-friendly kitchen appliances and using them in the most efficient way. Remember, a healthy kitchen is not only about the food but also about a healthy and safe environment – and your wallet will thank you too!

Energy-Efficient: Still confused? You may visit the best professionals like DydSpace, they are not the only kitchen but also affordable home interior designers decorators in Kolkata

Also Read: How To Start Your Day Positively?